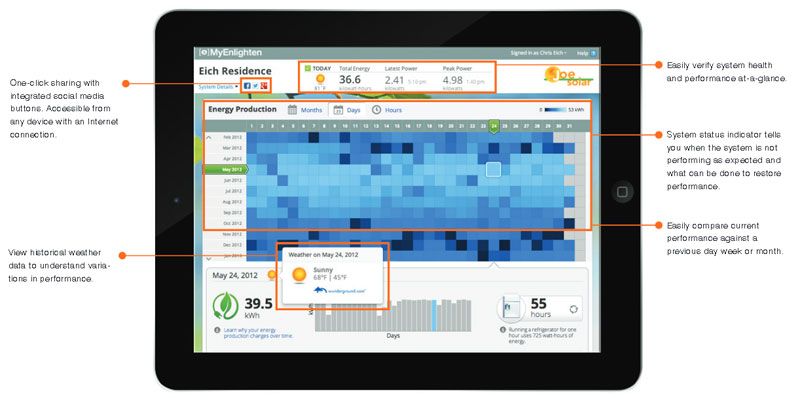 Battery systems have come a long way in the past few years. And Enphase, the world’s leading microinverter manufacturer, is shaking up the market with its innovative, modular AC battery system. For off-grid consumers living in small homes, units and townhouses, there are many benefits of the Enphase AC battery.

A Quick History of Battery Systems

Winding back to 2012 the only option for a serious battery system was to install some ‘wet cell’ batteries that may last ten years and put up with a tedious maintenance schedule. The sizing of these systems was based on a ‘depth of discharge’ of 40% meaning that 60% of the battery was left sitting there unused. To make matters even more complicated, the batteries were installed in ‘strings’ and a single failure or change to system capacity, often meant that the entire string had to be replaced.

At the same time, lithium-ion solutions were entering the market at exorbitant cost. Utilities and analysts cried that it would be decades before the technology became competitive whilst innovators such as Elon Musk projected seemingly impossible advances. Generation One was released with poor temperature characteristics which often meant that systems shut down over summer. They also required advanced Battery Management System algorithms which only communicated with certain inverters. The market responded with claims of ‘battery ready’ which only further confused consumers.

Whilst all this was happening, Enphase was quietly working away on a genuinely new concept. They call it the AC battery, and at its heart are Enphase’s key design criteria of modularity (ensuring no single point of failure), extremely long lifespan and an almost DIY ease of installation.

Since then Tesla has come out claiming a ‘world first’ inverter driven battery technology, but the clear fact remains that not only did Enphase do it first – they did it with a longer lifespan and a far easier installation process that is suitable not just for new, but also for any old inverter on the market.

The Benefits of Enphase AC Battery

The benefits and true beauty of the Enphase AC battery can be quite hard to understand. At first glance, many were underwhelmed by its small discharge rate and capacity. Over time a few things have changed this opinion and we’re now at the stage where Enphase have not only a decisive market niche but also a solid chance at taking a key percentage of the mass market alongside front runners, LG Chem and Tesla.

1. Compatibility and Ease of Installation

The Enphase AC battery key advantage is compatibility. It will work with any inverter old or new. It is so simple to install that a unit can be up and running on the wall in less than 10 minutes.

Its other key advantage is modularity. Whilst its small size can sometimes be a disadvantage, system integrators need to be aware that no single point of failure and endless upgrade options are something that many battery systems simply can’t offer.

Remember what happens if a ‘string’ of batteries fails? Well, the same thing can happen if you lose your Powerwall. If that happens in an Enphase system, the rest of the batteries keep on operating and the overall effect is minimised. This has large implications not just for the consumer market, but also the commercial sector where uptime can be critical.

Even less apparent is the charge and discharge advantage. At first, the solar market cried out for faster discharge rates completely ignoring the effect this could have on battery life. These discharge rates are specified as ‘C ratings’ and both LG and Tesla are capable of C1. What this means is that the battery can be discharged to zero in one hour. Anyone who has seen the internal temperature of these batteries as they attempt that sort of discharge rate will know that they run internally above 40 degrees Celsius and that no amount of air conditioning will keep that temperature stable. An Enphase battery has a C4 rating which means that it will charge and discharge over a leisurely 4 hour period which leads to a much longer service life. This is illustrated by the Enphase AC battery’s impressive warranty of 7300 cycles. By way of comparison, competitor products specify 6000 cycles, but this figure could be significantly less if discharged at higher rates.

Enphase batteries can be expanded in small or large quantities at any time without affecting another battery in the system.  This makes them perfect for adding onto installations large or small where only partial upgrades are required.  They’re also suitable for people that want to ‘test’ battery technology with the aim of adding further units at a later date.

There are no DC isolators required as there are no hazardous DC voltages.  The fire risk from DC systems is well documented.  Enphase completely removes this DC fire risk.

What has become clear over the past few years is that comparing batteries is no easy task and that no battery is suitable for all applications. Key criteria include cycle life, depth of discharge, environmental factors (often overlooked) and discharge rates.

The Enphase AC battery seems very suitable and even cost effective in smaller applications such as townhouse or unit developments. It also has application in low energy use homes such as retired or working couples with no kids. The large LG and Tesla batteries are generally more suitable for more energy intensive environments. 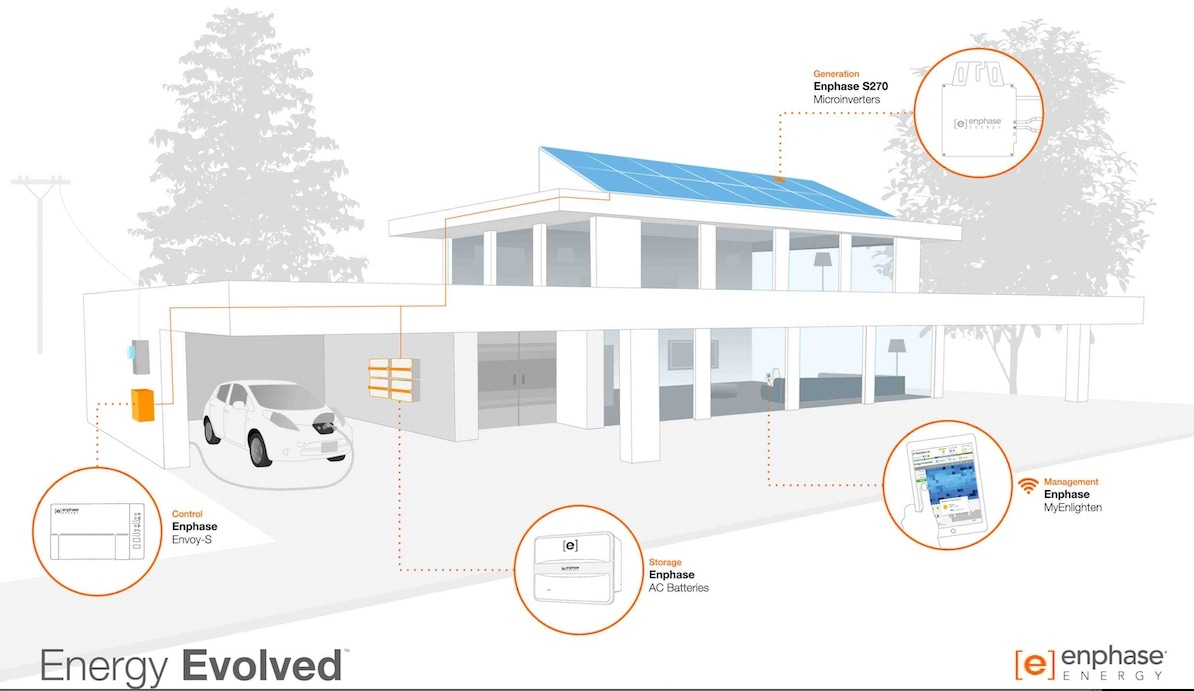 Unfortunately, what many system designers don’t understand is that the ROI of a battery in an on grid hybrid situation is determined by its use. Whilst this sounds obvious, most designs seem to include additional capacity which effectively cannot be included in an ROI calculation. If we look at the typical home’s nighttime demand, most customers use between 200-400Wh of energy each hour as their ‘baseload’ consumption. If one is looking at achieving a maximum ROI outcome, a battery pack should be designed around this baseload output, and not the facilities maximum demand. How many Enphase batteries would it take to meet that demand?

There are two things to consider here. One is the maximum demand. Each Enphase AC battery will put out up to 270W. So just two batteries will easily cater for demand. To meet that demand all night long would require the Wh x the number of hours. Once again we are calculating around the lowest total demand which is the shortest day of the year.

Excess capacity will result in lower if not absurdly poor ROIs.

It’s worth noting that these calculations do not include heating or cooling requirements, however once again, sizing a battery system to these peak demands will result in extremely poor ROIs.

Recently we found yet another application for Enphase batteries and it’s one that has huge applications in the off-grid sector. Enphase AC batteries will AC couple into island systems. This means that an old wet cell pack could be compensated with lithium ion technology as it fails and if need be, in modular steps. Another key advantage is that Enphase batteries can be AC coupled on top of other lithium batteries such as LG Chem to provide increased maximum demand and a protective buffer between the C4 and C1 ratings.

The system pictured, installed October 2016, shows an off-grid system installed in a world first configuration by Ecoelectric. The LG Chem 10kWh units are used for bulk storage and are illustrated in the logging as ‘the grid.’ The 4 Enphase AC batteries clip the top of the load and take priority when charging or discharging.  This provides another 1kW or so of additional demand and will ensure that ‘the grid’ lasts far longer than it would have otherwise. Temperature rises are minimised and redundancy is further increased. 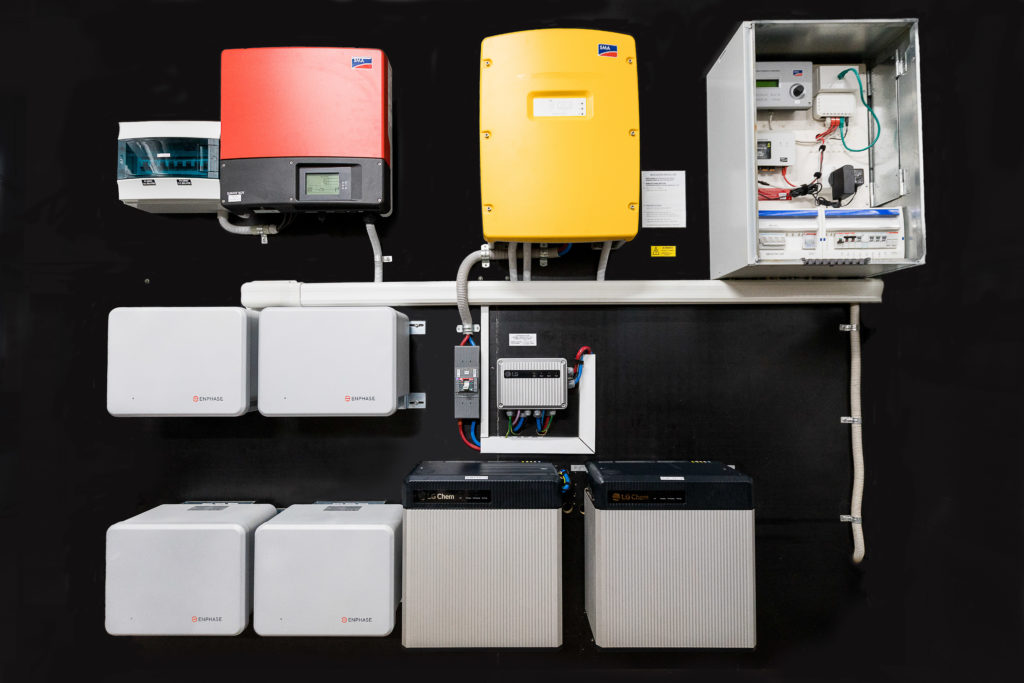 Overall it is always important to consider application and requirements. There are too many people shopping for brands which will never result in the best outcome, nor the best ROI. Furthermore, it is imperative that designers understand that batteries come in many different sizes with many different design factors. These factors must be understood before it is possible to recommend a truly unique and integrated design.